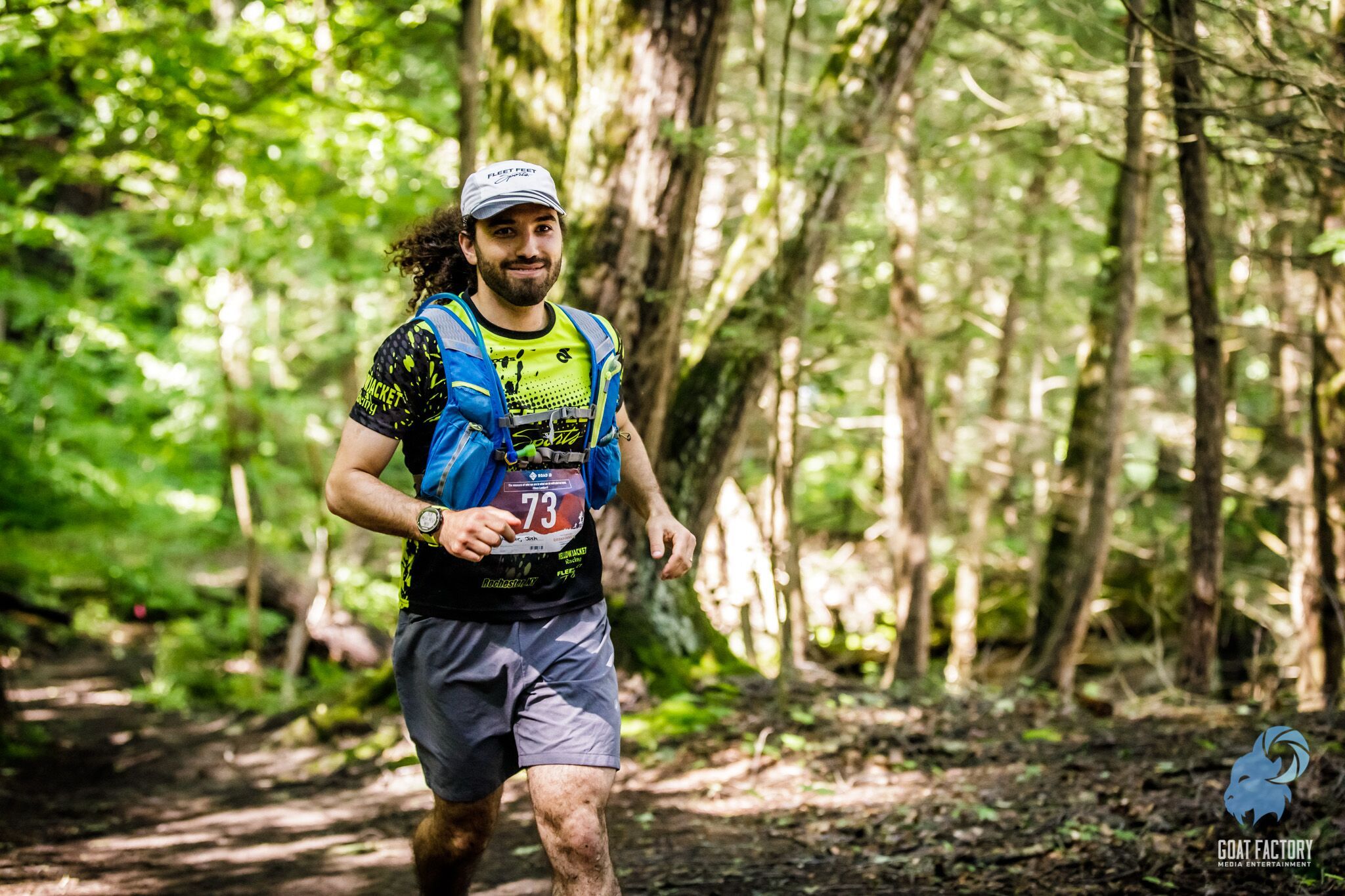 Many on the Genny is a race I've thought about doing for a few years. This was the third year of the event, and I finally got up the nerve to try it. 40 miles, most of which on Letchworth State Park trails, is very intimidating. Sure, I've run the Battle at Bristol Mountain 50k 3 times, but Many on the Genny is 10 more miles than that. Now that I've done both events I would say they're actually a pretty similar level of difficulty, since Many on the Genny is 10 miles longer but only has about 40% of the elevation change.

My biggest concern going into MotG was my right knee. After running Sehgahunda 72 a month prior my knee had been giving me on-and-off twinges, and I was concerned I would need to drop at some point due to it. My other main concern was being trained enough - my weekly mileage has been hovering around 30 miles per week, which isn't quite where it should be.
Adding to my stupidity, I signed up for the Finger Lakes 50s waitlist, and was called up the day before MotG. So by Sunday evening I would need to decide if I was ready to run a 50k (or 50 mile) race 2 weeks later. With my knee at risk I figured it was unlikely I would decide to run Finger Lakes 50s.

After only 4 hours of sleep and an hour drive down to Letchworth State Park, I was at the starting line on the west side of Mount Morris Dam. The race director Eric announced that some portions of the course were underwater, so we would unfortunately be running along the road more than previous years. Since this was my first Many on the Genny, I don't know what I missed out on. Even with slightly less trails on the first half, I knew the 2nd half was 100% trails, following the same trails Sehgahunda runs but in reverse (and no checkpoints!). Since this race is 50% longer than Sehgahunda, I figured a good time estimate floor would be 50% longer than my last Sehgahunda finish (~5:47), so about 8:30. Based on that, I would be pretty happy with a finish time between 9 and 10 hours.

At 6am Eric started the race, and we headed north for a quick mile loop before the long journey south. When we passed the start I was tempted to use the bathroom, but decided against it. This was my first mistake of the race, and at mile 8.5 I ended up needing to use the woods. But hey, that's just something you have to deal with as a runner, right?

After a couple miles of going out too hard I settled into a nice easy 11 to 14 minute pace. Going into the race slightly under-trained probably helped tone down my confidence here, pressuring me into running smarter. At mile 10 or 15 my right knee started bugging me, and I resigned myself to the fact that I would not end up running the Finger Lakes 50s 2 weeks later. I started walking much more for a few miles with the goal of making it through the race without significant pain.

When doing ultras, I use a CamelBak hydration pack filled with water, and get most of my calories from Tailwind, Clif Bloks, PB&Js, and Sour Patch Kids. I usually carry Tailwind in a small belt bottle and keep the hydration pack bladder filled with plain water. However, I realized at the start that I forgot my belt bottle. Rather than risk dehydration if I wasn't able to stomach Tailwind toward the end of the race, I did my best to get by on solid calories and plain water for most of the day. At the three aid stations in the first half of the course I stocked up on more PB&J, more Sour Patch Kids, and plenty of pickles. I've never been big on pickles during a race, but today they were working really well for me. 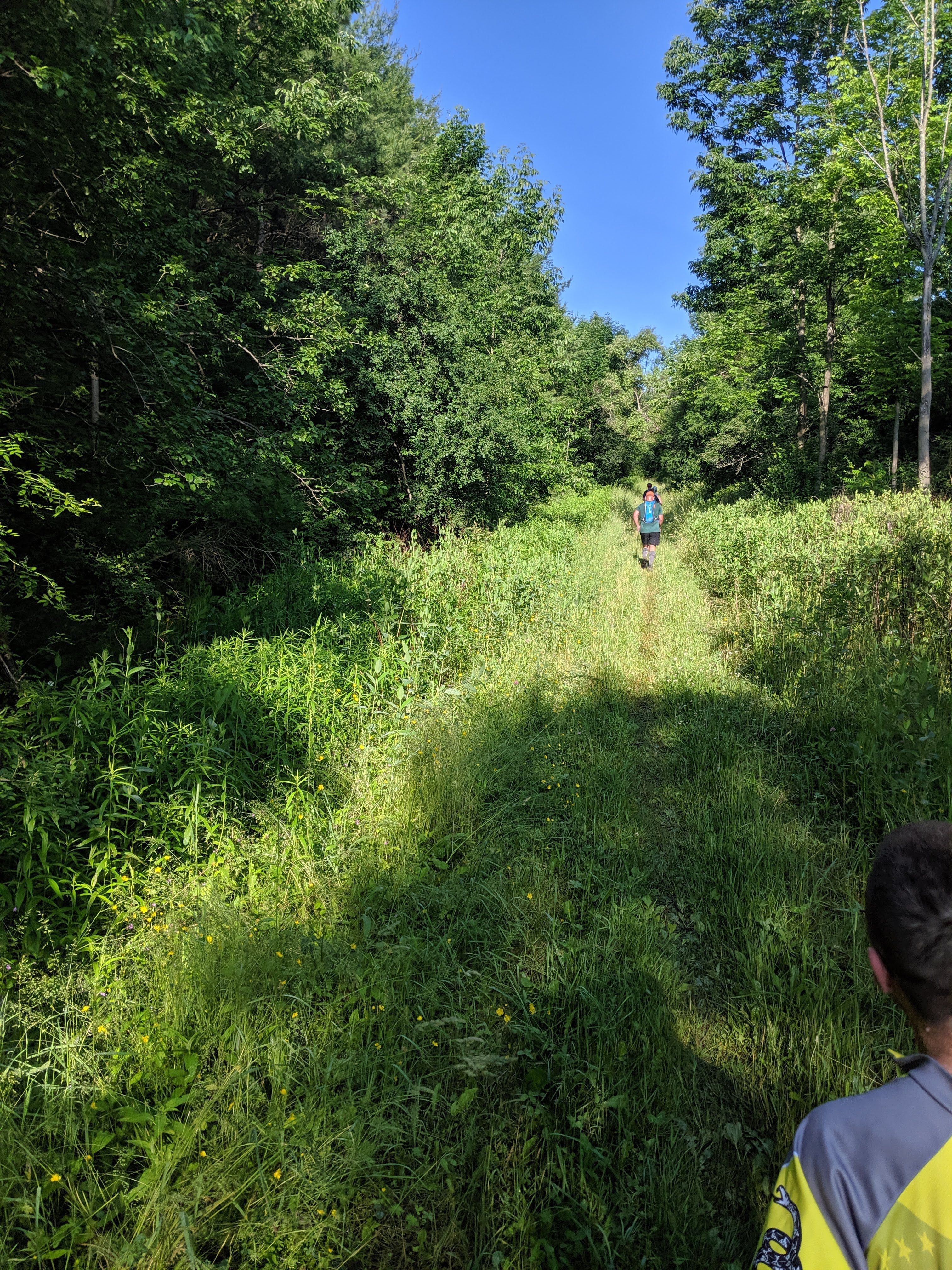 While I was off in the woods breaking my running distance record, Kristen kept herself busy breaking her road biking distance record. She planned on biking a perimeter loop of Letchworth, a total of 36 miles. We planned on meeting at the 3rd aid station at mile 20, so when I arrived I was hoping she would be there waiting for me. Unfortunately, I didn't have cell reception after mile 5, so I couldn't let her know when I arrived. After cracking open my drop bag and having some frozen watermelon (SO GOOD) and a couple perogies, I had to keep going. I crossed my fingers that her ride was going as well as my run was.

The views during the first half of the race really highlighted the beauty of the Letchworth gorge. Every time the course went along the edge I couldn't help myself from gawking at the incredible views. Shortly after the aid station, we crossed over the Genesee River at a pedestrian bridge and started heading back north. The rock formations and landscape around the bridge was similarly incredible. Due to erosion the pedestrian bridge was not open, but Letchworth let us runners cross, as long as we promised to walk, not run. Not a problem! There's so much beautiful scenery to look at, it's probably for the best that we had to walk. 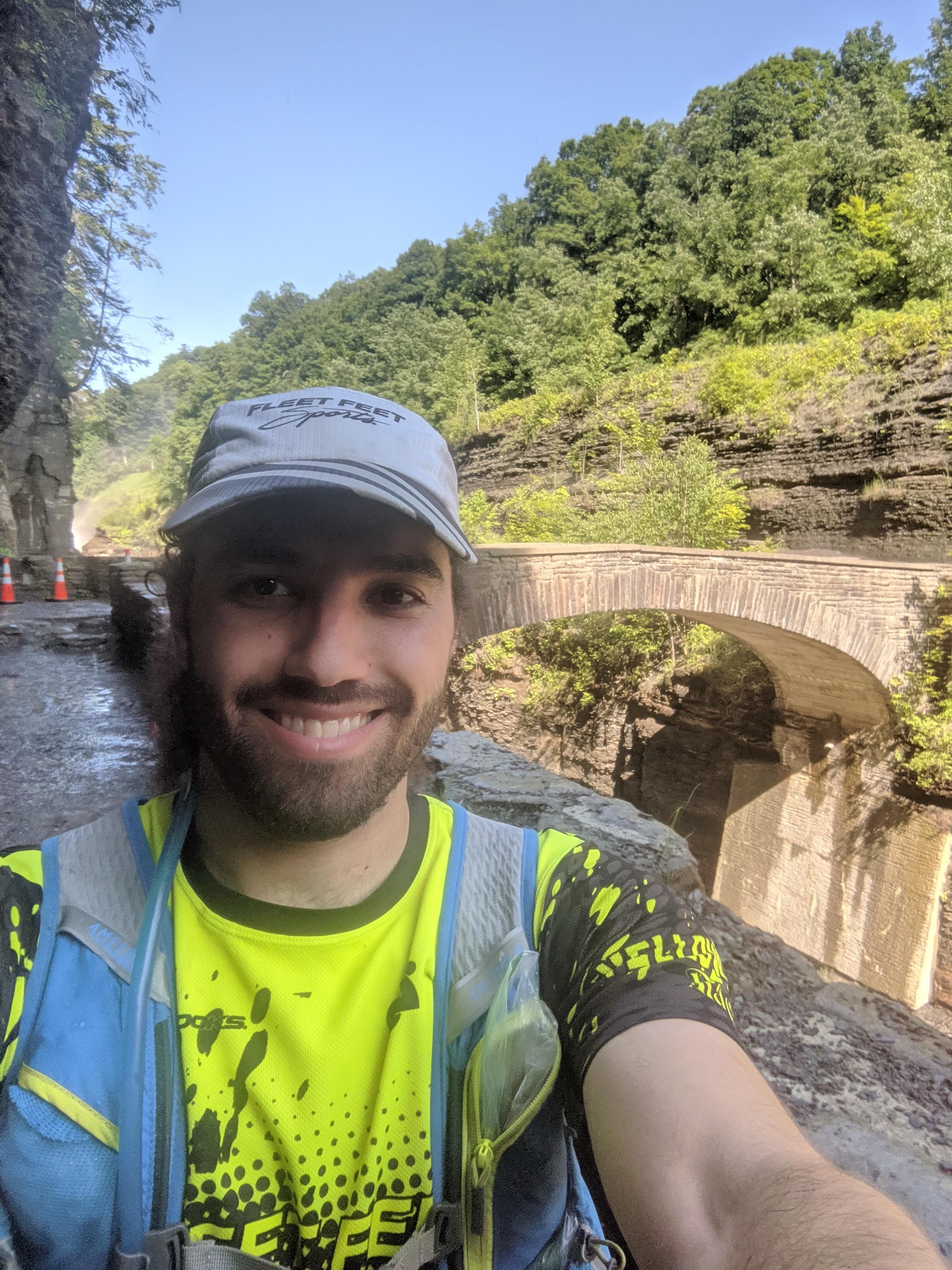 The next 5 miles were my least favorite part of the course. Gone were the beautiful views of the Gorge, and into the woods of the east side of the river. We ran for a mile on the road used by the Vale of Three Falls, which brought back some rather unpleasant memories from last month. Then a long, steep, muddy climb followed by my longest stretch without seeing anyone else. I also knew we were coming up on the Sehgahunda course, which I know fairly well, and around every turn I was hoping the course would arrive at something I recognized. Finally we emerged on Lake Road between Sehgahunda checkpoints 7 and 8 and started following the course backwards. At this point I was feeling fatigued, but strong. My knee had stopped hurting me, and I was feeling pretty confident that I would be able to finish. But I also knew that a lot can happen with 17 miles left in the race.
I had ran the first half of the race on-and-off with Joe Ciecierega, but he got out of the 3rd aid station much faster than I did. I caught back up to him a couple miles before the 4th aid station and entered it with him. This aid station was in the middle of the woods, and everything had to be hiked a couple miles in. Thanks to the Blue Foundation for being there! Not only did they have the same food as the other aid stations, but they also had grilled cheese. I don't like white bread, and a hate yellow American cheese, but that white-and-American grilled cheese was amazing! You never know what you're going to crave 26 miles into a race!

I headed out of that aid station with another runner who declined to eat the bacon at the aid station. I ended up running with Ryan Snyder, a very enjoyable trailmate, for 8 or 9 miles. He's done Sehgahunda 8 times and tries eating mostly vegan, so we had plenty to chat about. He definitely kept me motivated and actually running while we were together. However, a couple miles before the last aid station I was running low on water and solid food, so I dropped back to ensure I could make it on the reserves I had, run/walk-ing for a bit with Ed Ross, a friendly guy who came down from Ontario with his family to run the race. Looking back, I actually had plenty of food in my pack, but this was at mile 34 and my runner brain had taken over and convinced me that none of it was what I wanted. Additionally, about 2 miles before the last aid station (after I dropped back from Ed) there were unmanned jugs of water next to the trail to fill up with, but my runner brain convinced me that these weren't associated with the race, so I didn't end up refilling my mostly-empty hydration pack.

My next wave of hope came as I passed the turn for Sehgahunda checkpoint 1, which meant about 5 miles to the finish and entering the section of the course I am most familiar with. I still really needed to get to the next aid station, but knowing I was closing in helped me push the last 0.75 miles to the aid station. As the distant sound of "The Final Countdown" started growing louder I downed the last of my water and pushed in hard to the crowded aid station. I wasted no time in stuffing my face with pickles, grilled cheese, and cola.

As my stomach filled I felt a barrage of buzzing from my pack - I had cell phone reception again for the first time in 30 miles! As I left the aid station with mounting energy, I made sure Kristen had an accurate finish estimate so she could ensure her arrival at the finish line in time. I was at 8:50 with 4.5 miles left - at a 15 minute pace I could break 10 hours! After securing my phone, I kicked it into high gear. I knew I had enough in the tank, and I was going to try to make it my fastest set of miles. Walking the mud and running the dry ground worked well for me, and I met a steady stream of other runners that I passed. Half a mile from the finish line the trail pops out of the woods briefly, and I started my final kick into the finish line (passing Kelly Teeter, who I met at the Bristol 50k last year, and her husband Josh). In the end I passed somehere around 12 people between the last aid station and the finish line. 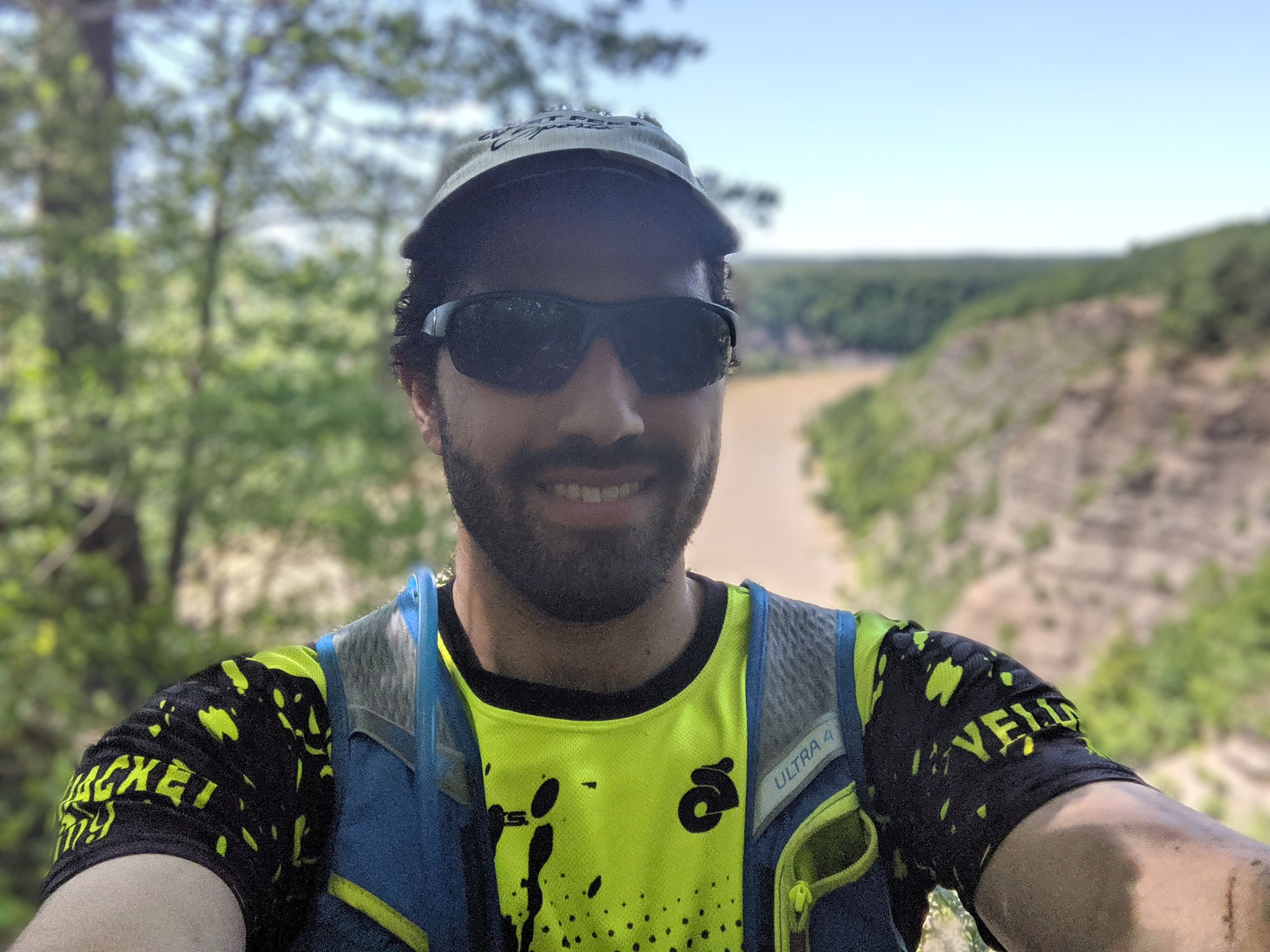 I crossed the finish line, gave a high five to the race director, and received my finisher award. 9:50 finish time, which meant I did those last miles in about a 13 minute pace! I met my goal of finishing, my goal of not having knee pain at the end, and my goal of between 9 and 10 hours! Kristen did make it on time to the finish line, as did her parents. The post-race food was AMAZING - vegetarian garbage plate - and exactly what I needed in that moment. Besides the general fatigue, the only part of me that was hurting was some shin splints. 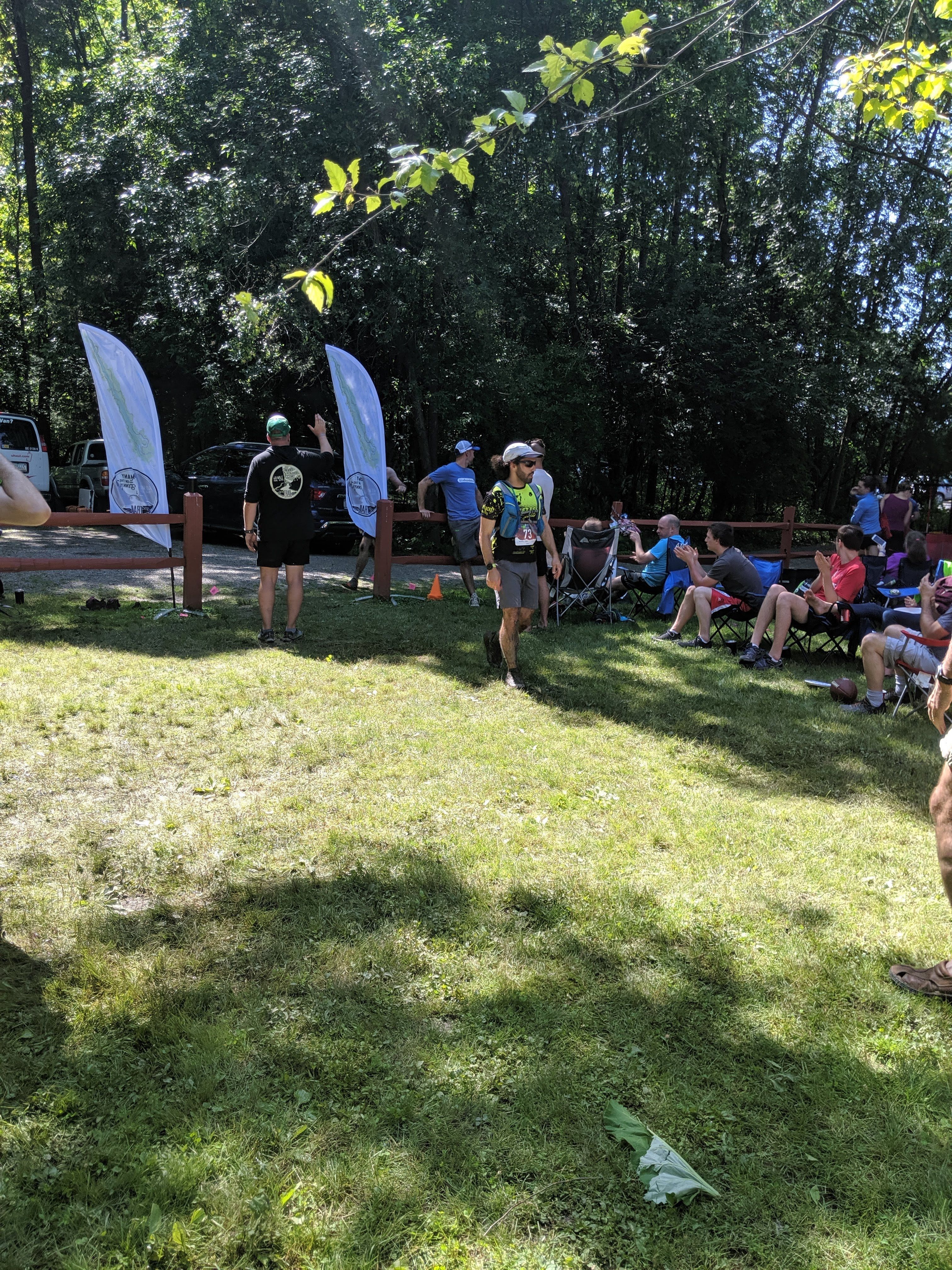 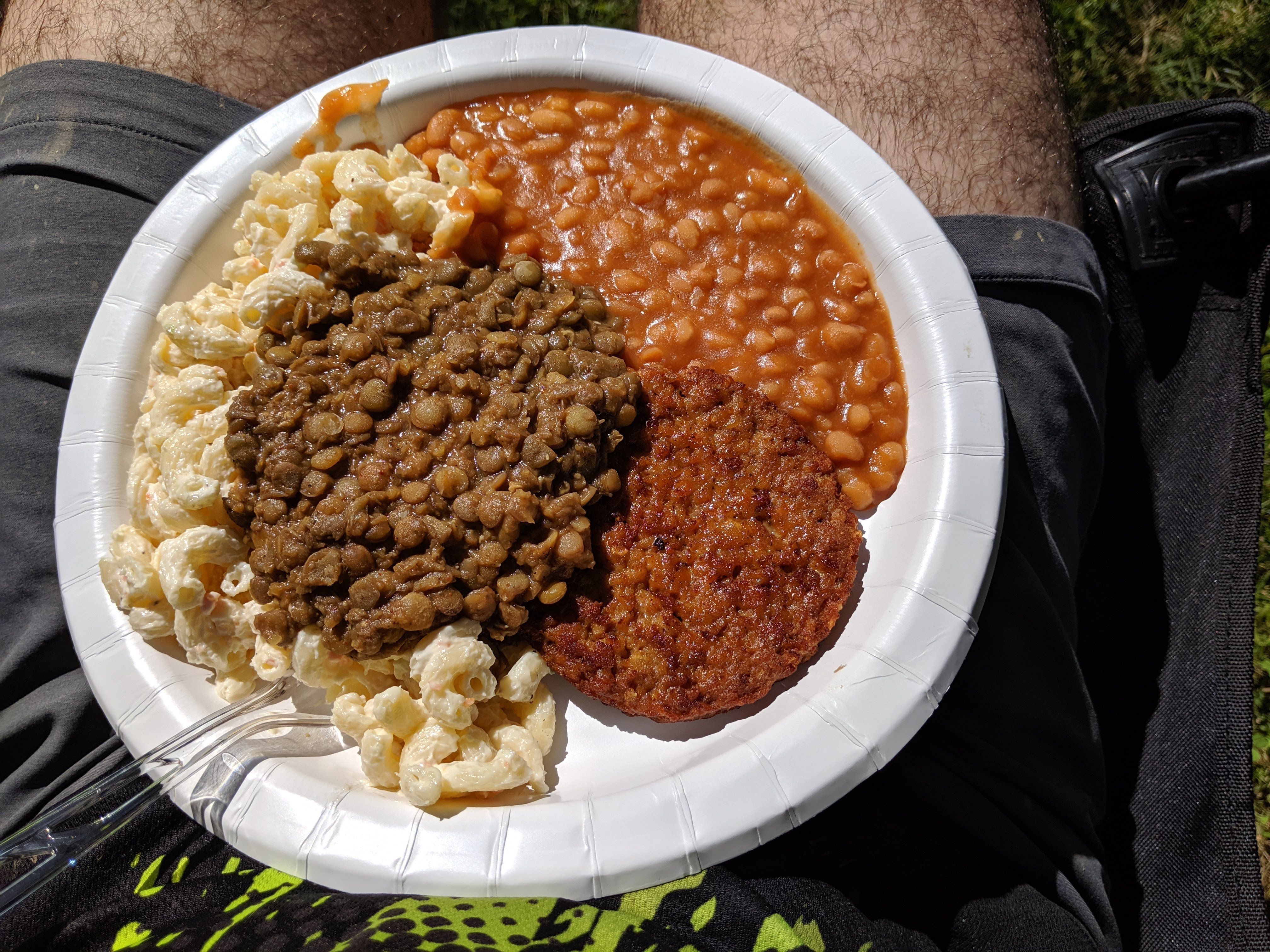 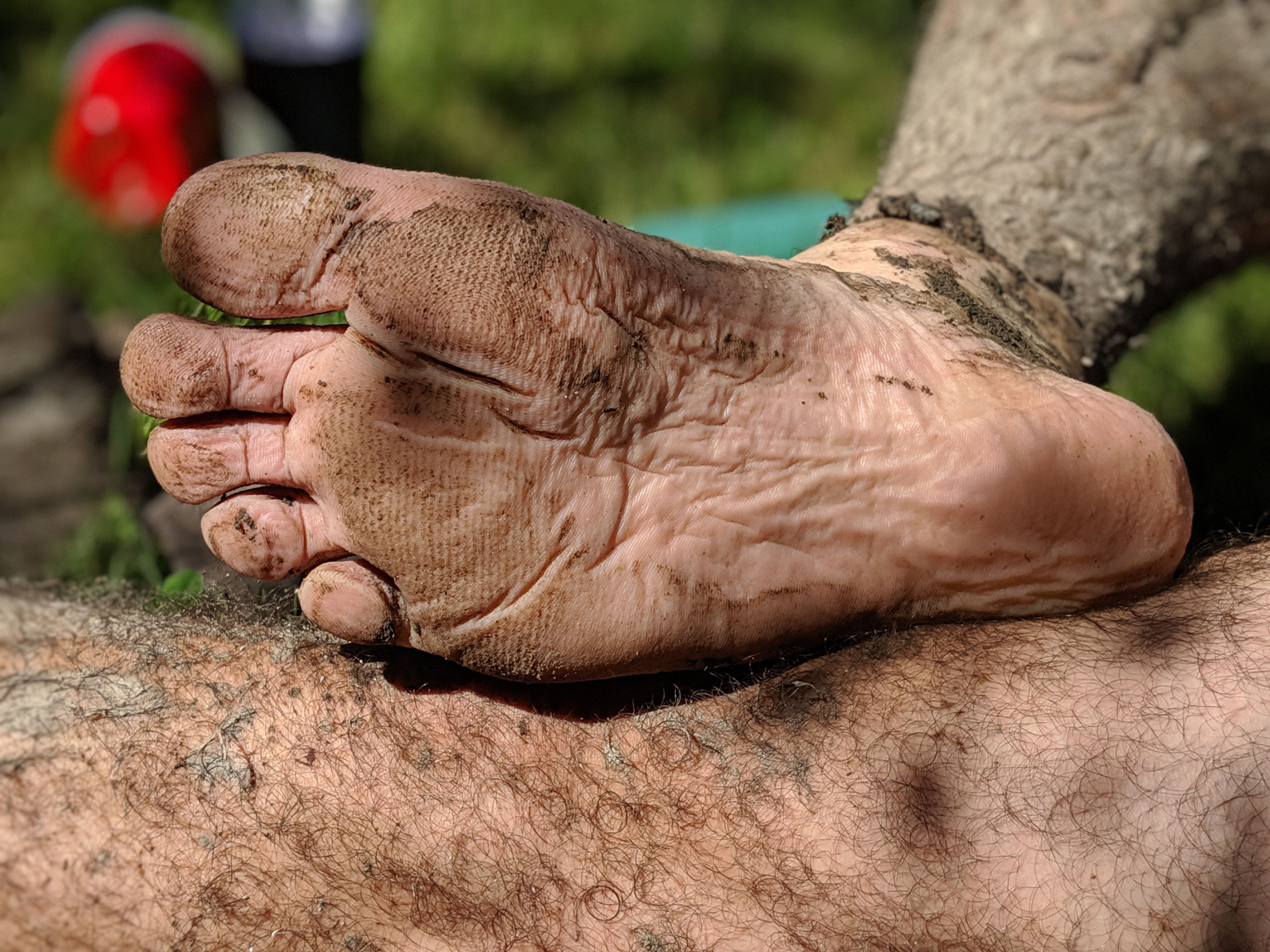 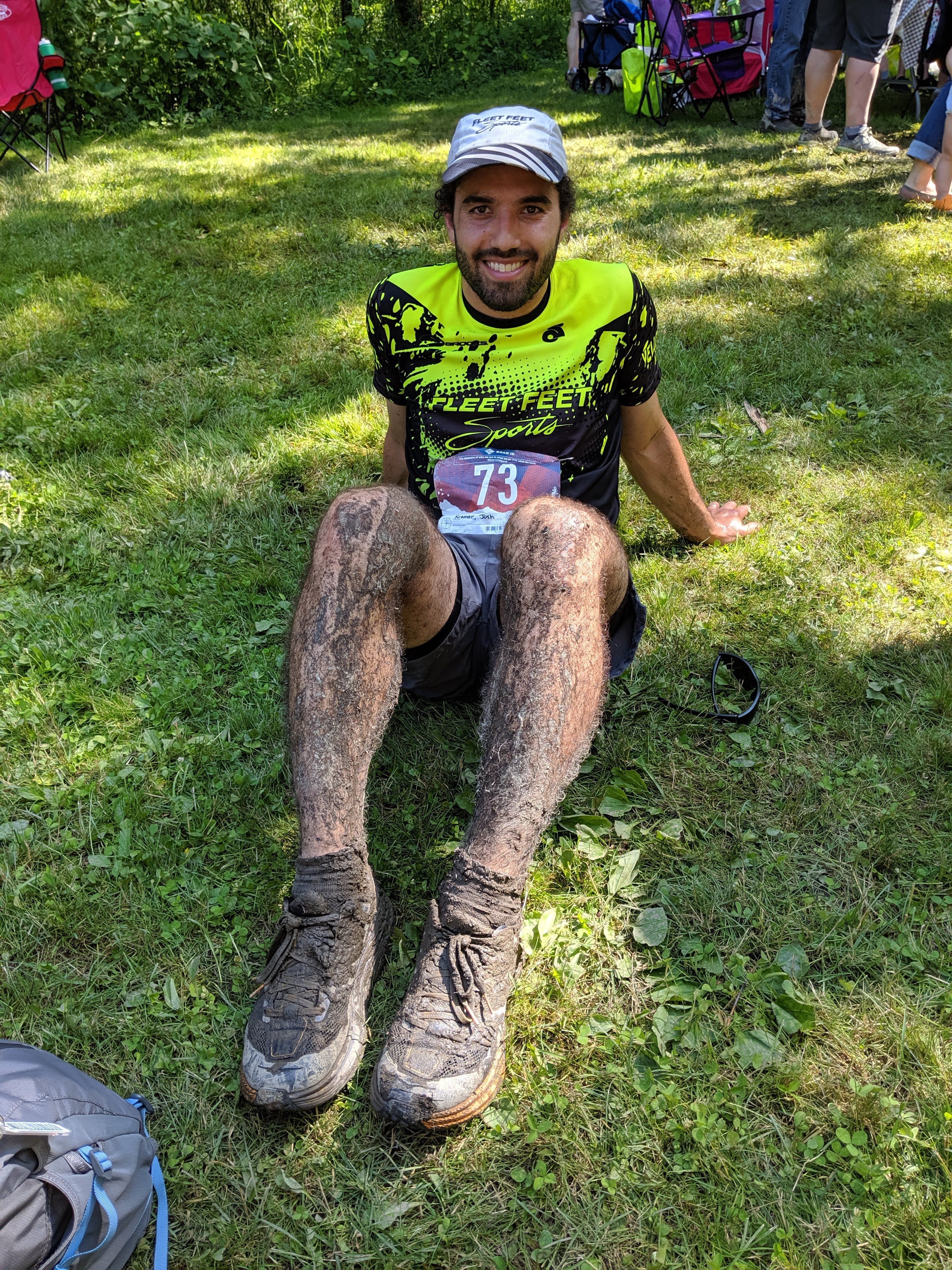 The day after the race I got back to the Finger Lakes 50s waitlist...and accepted the spot! I know, pretty stupid. So, July 6th I'll be shooting for my 2nd distance record of the summer, 50 miles, 2 weeks after breaking it with a 40 mile run. Luckily, I'll be able to complete the event as a 50k if I think I can't make it through the final 19 miles. Wish me (and Rick Bennet and Oliver Brett, who are also running it) luck!