A 50k up a mountain in Seattle, Washington. My attempt at 4 ultramarathons in 6 weeks 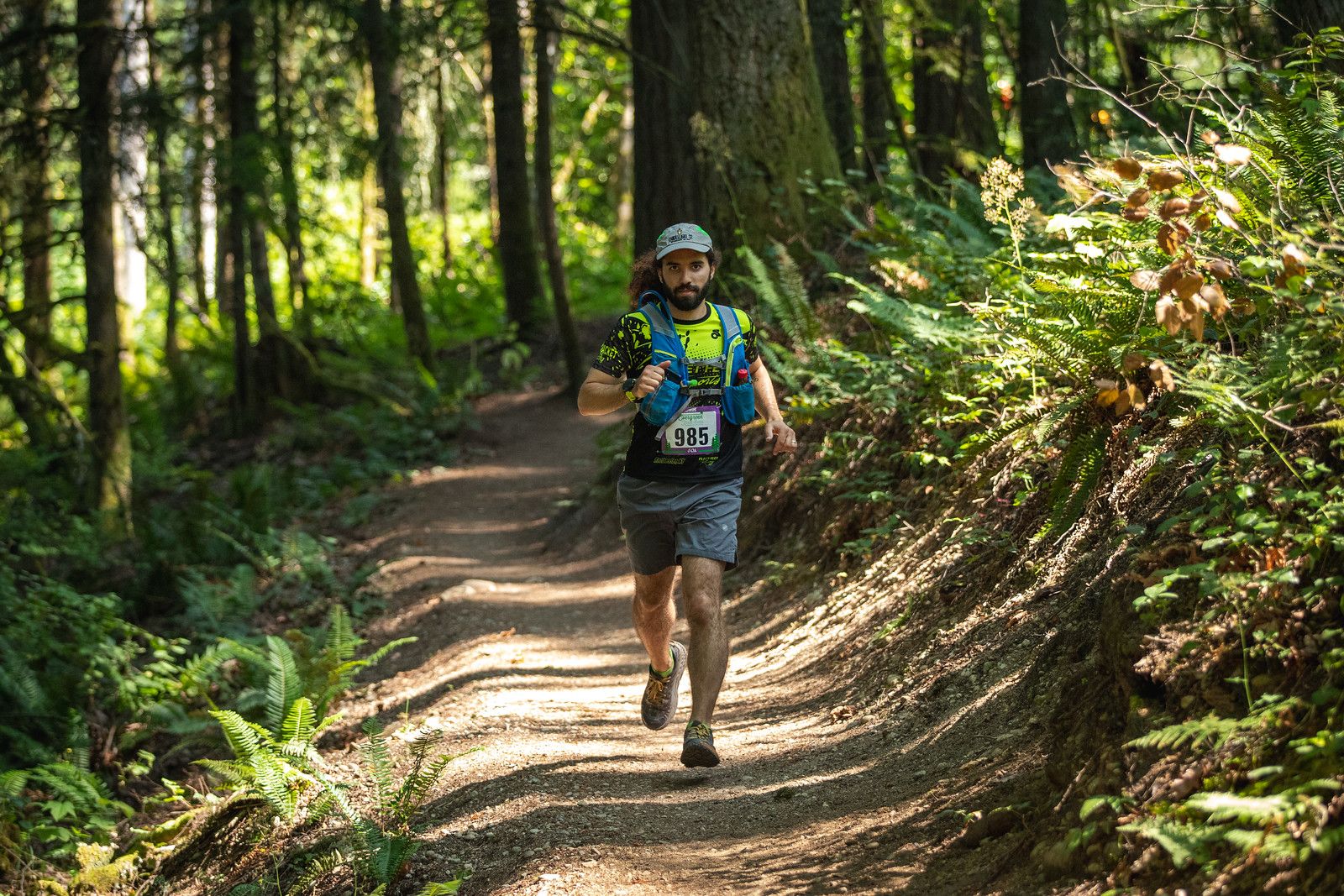 When I learned last year that our friends Nicole and Jeremy's Seattle wedding would be the same day as Battle at Bristol Mountain 50k, I knew my streak was over. I ran and completed the 50k the first 3 years the event existed, but I would have to miss it this year. I was disappointed (yet very excited to celebrate with Nicole and Jeremy's family and friends!), but I wondered if I could get the opportunity to run an ultra in Seattle while we were in town.

I contacted my friend Bobby, with whom I ran in the RIT Running Club while we were at RIT. I ran my first marathon with him in 2011, and he lives in Seattle, so I hoped he would agree to do a race with me while I was in town. He was interested, and after considering a few events for that weekend (including an awesome looking 50k around Mount St Helens) we settled on the Tiger Peak Challenge, a 50k with 9,000 feet of elevation. That's only 75% of the elevation that the Bristol 50k has, so I figured it wouldn't be quite as hard as that.

I planned this race as my last ultra of a very busy summer. It was to be my 4th ultra in 6 weeks (one every other weekend - Many on the Genny, Finger Lakes 50s, and Candlelight 12-hour). I knew there was a risk I wouldn't be recovered enough to do well, but I figured I would be able to power through and just keep moving.

The week before the race was a very exciting visit to Seattle and the Olympic Peninsula. We did a bit of walking and hiking as a group, but never did anything longer than a couple miles. By Friday, my legs were feeling a little tired but not tired enough to concern me.

Bobby picked me up Friday evening in his Tesla Model 3 (my first time in a Tesla - that is an awesome car!) and brought me to his house. His cat was NOT happy to have a visitor - she sat in the doorway to the master bedroom and hissed at me whenever I walked by We went with his partner to a Thai restaurant down the street for dinner, prepped our gear, and went to bed. 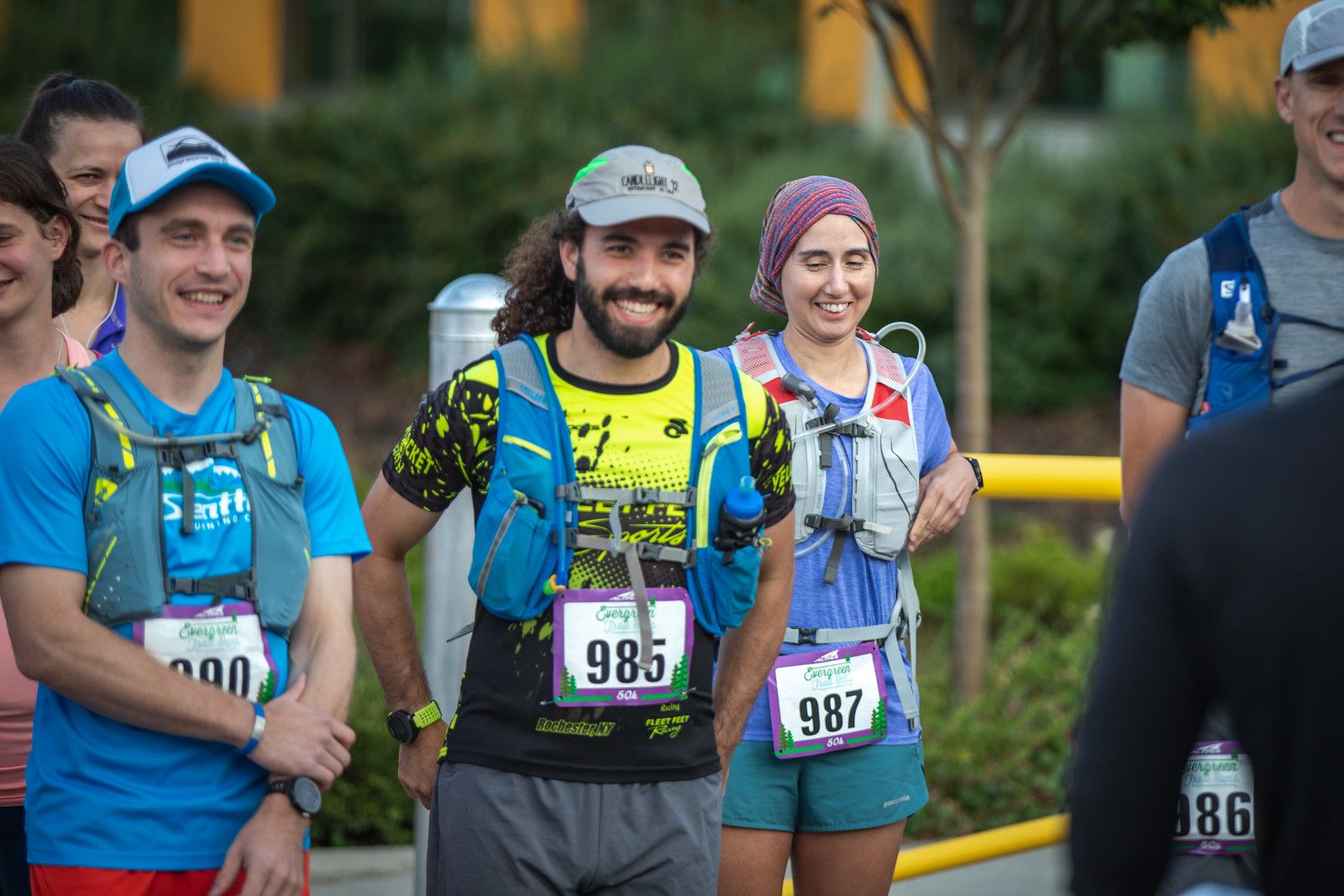 The Tiger Peak Challenge has half marathon, full marathon, and 50k distances. The half marathon is one 13 mile loop (starting one hour later than the other events), the marathon is 2 loops, and the 50k is a 5 mile loop followed by two 13 mile loops. We drove the 40 minutes and arrived about half an hour before the start. It was a cool morning and I was chilly in my shorts and short sleeve splatter jersey. But I'm always very careful what I wish for regarding temperature during a summer race!

At a little after 7am, the 40 of us headed out on our journey. After a mile or so the marathon runners took a right to head out on the 13 mile loop, and the 50k runners took a left to complete the 5 mile loop. Bobby and I took it fairly easy, knowing that the race is long and that the first loop had very little elevation gain compared to the rest of the race. 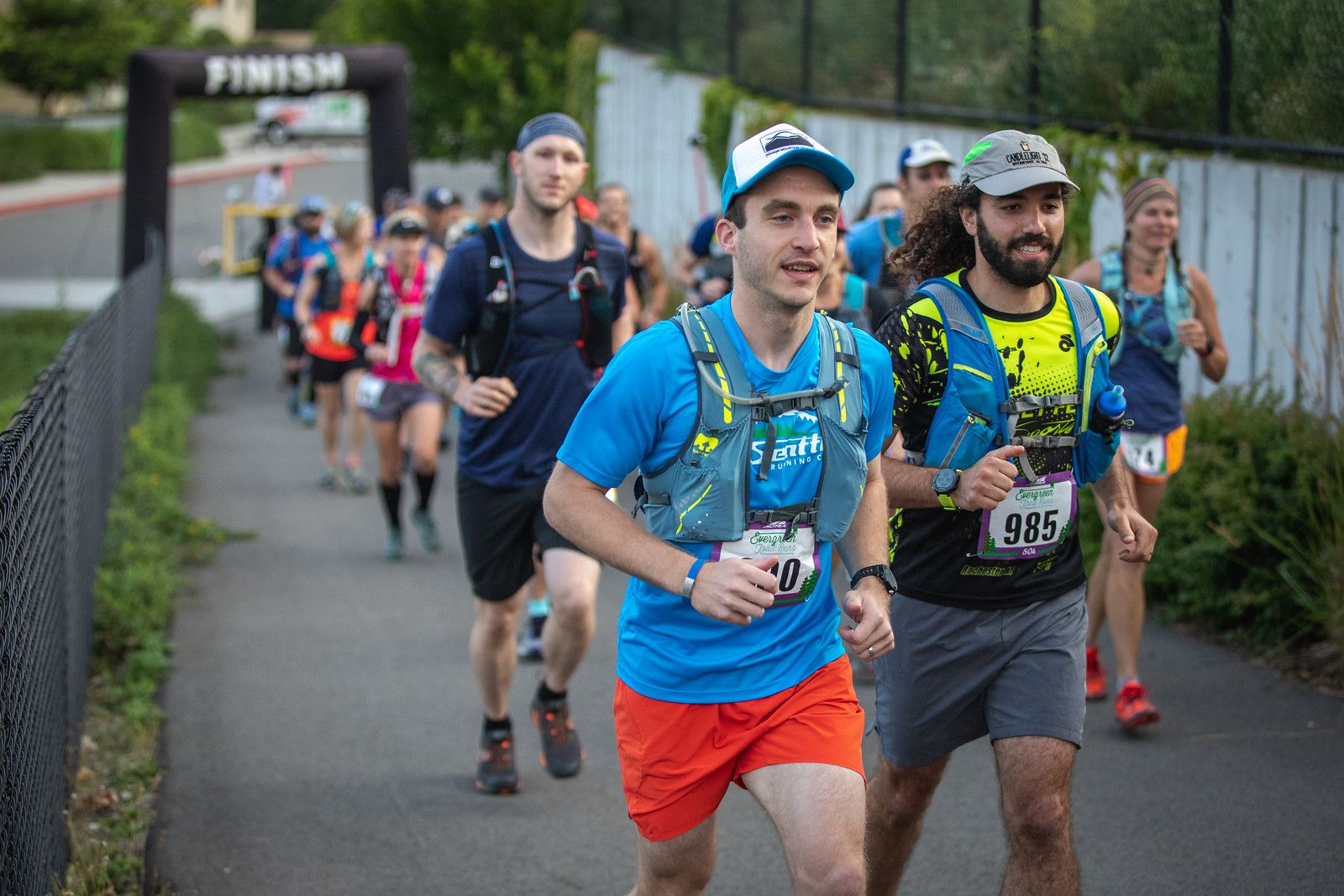 We made it back to the start line in just under 1 hour. The half marathoners were all lined up, ready to start. I grabbed some Coke that I brought with me, but for the most part we had what we needed in our packs already. We started the 13 mile loop just a minute or two after the half marathon started. 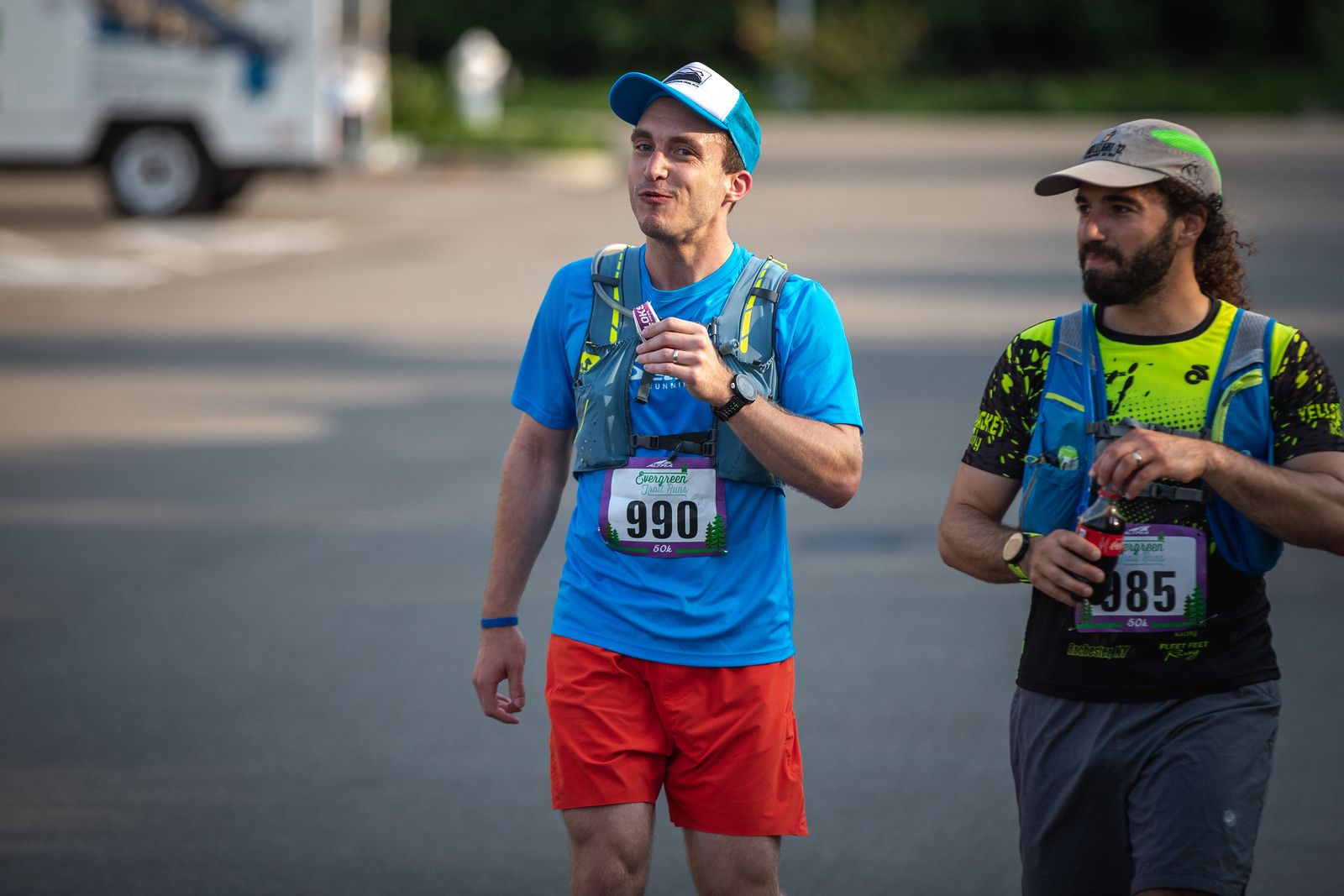 The climb up the mountain takes place over 5 miles and 2,600 feet of elevation gain. Unlike the Bristol Mountain 50k, this is one (mostly) continuous climb. There is no reprieve from the uphill. After just a little bit of climbing I realized how much the fatigue from my previous three ultras this summer was weighing on me. As we climbed, Bobby started pulling away from me. Every 10 or 15 minutes he would pause and wait for me to catch up, and he remained in view most of the time, but I knew I wouldn’t be able to keep up with him for the entirety of the race. 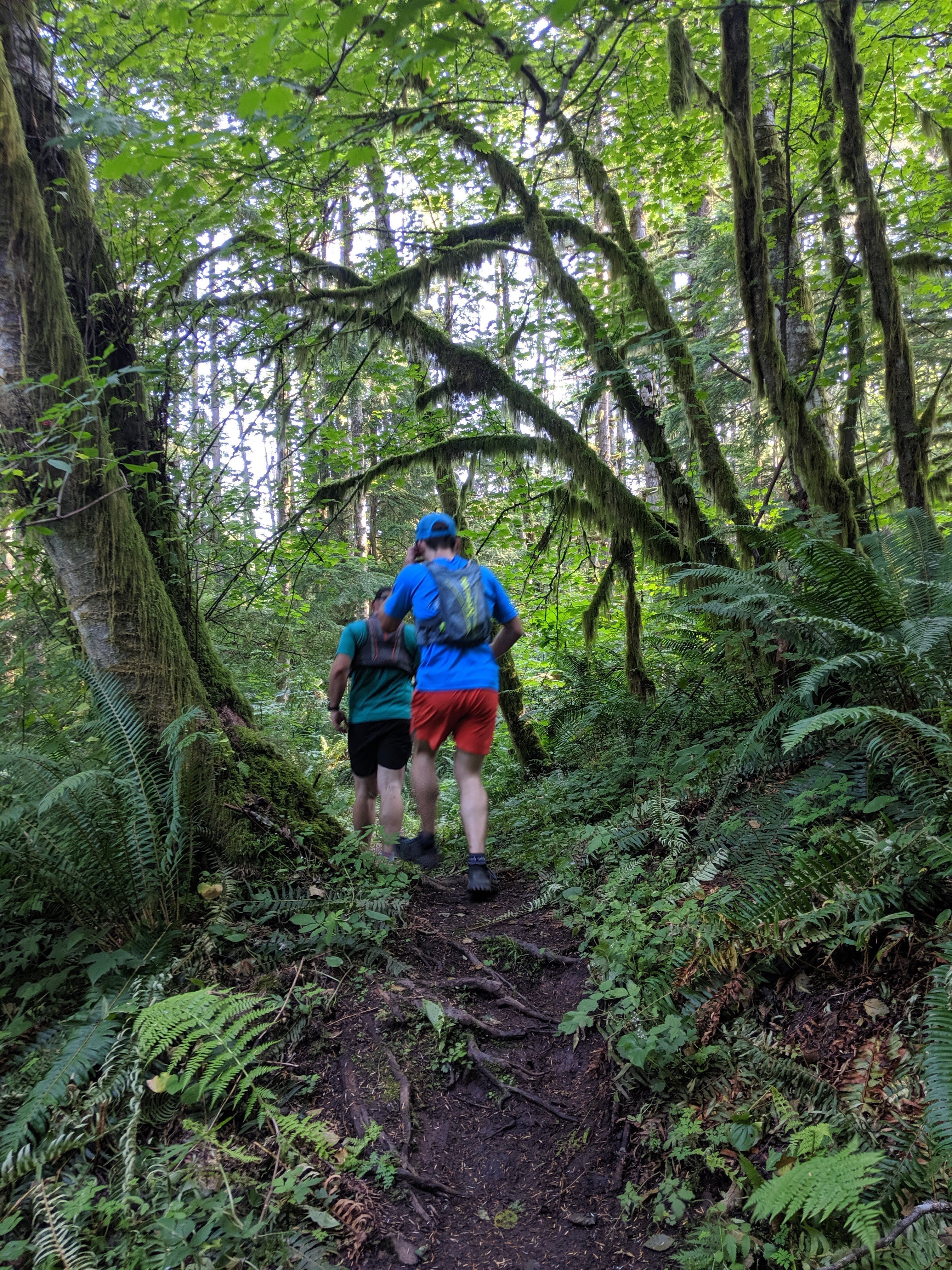 One of my biggest race challenges has always been getting myself to fuel enough. A couple hours into a run my stomach gets empty and putting any calories into it (liquid or solid) causes significant nausea. I reached 9.5 miles into the race and 2,500 feet of climb, and came out of the woods onto a dirt road where Bobby was waiting for me. I knew that if I didn’t start taking in some calories I would be screwed, so I sat down on the road and spent 5 minutes trying to get a couple bites of PB&J down. Bobby did some math and realized that we were coming very close to not making the 11:30am cutoff for starting the 2nd loop, so we went down the short downhill on the dirt road and got to the aid station and the base of the final quarter-mile climb before starting our descent. 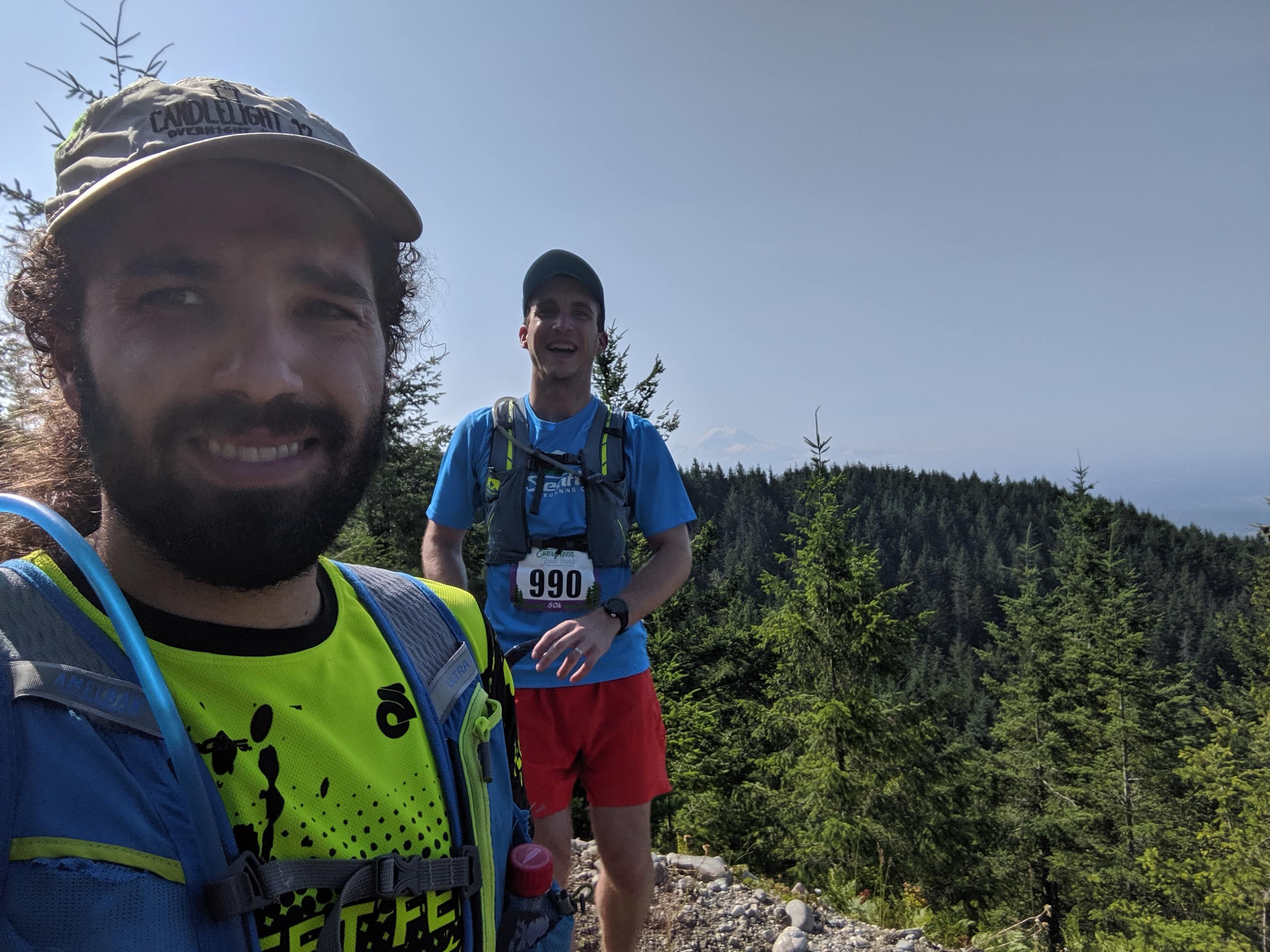 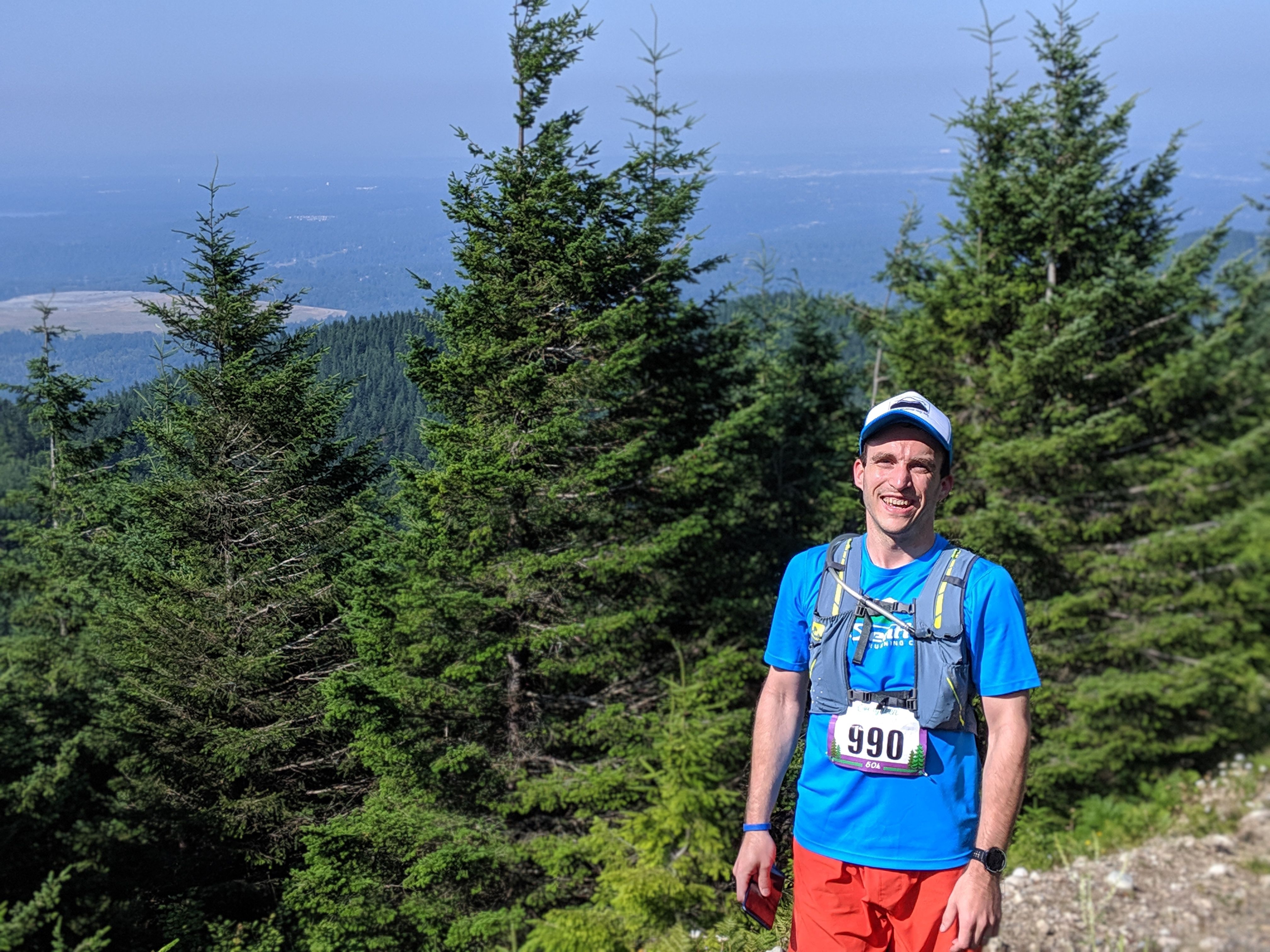 As we started our descent and realised what sort of pace we would be able to hit, we realized we would have to hit an 11 minute pace on the downhill to make the cutoff. I knew that I was holding Bobby back, so I told him to leave me and try to make the cutoff by himself. I ended up averaging a 13 or 14 minute pace on the downhill, and after sticking with him for another half mile or so he slowly pulled out of view. 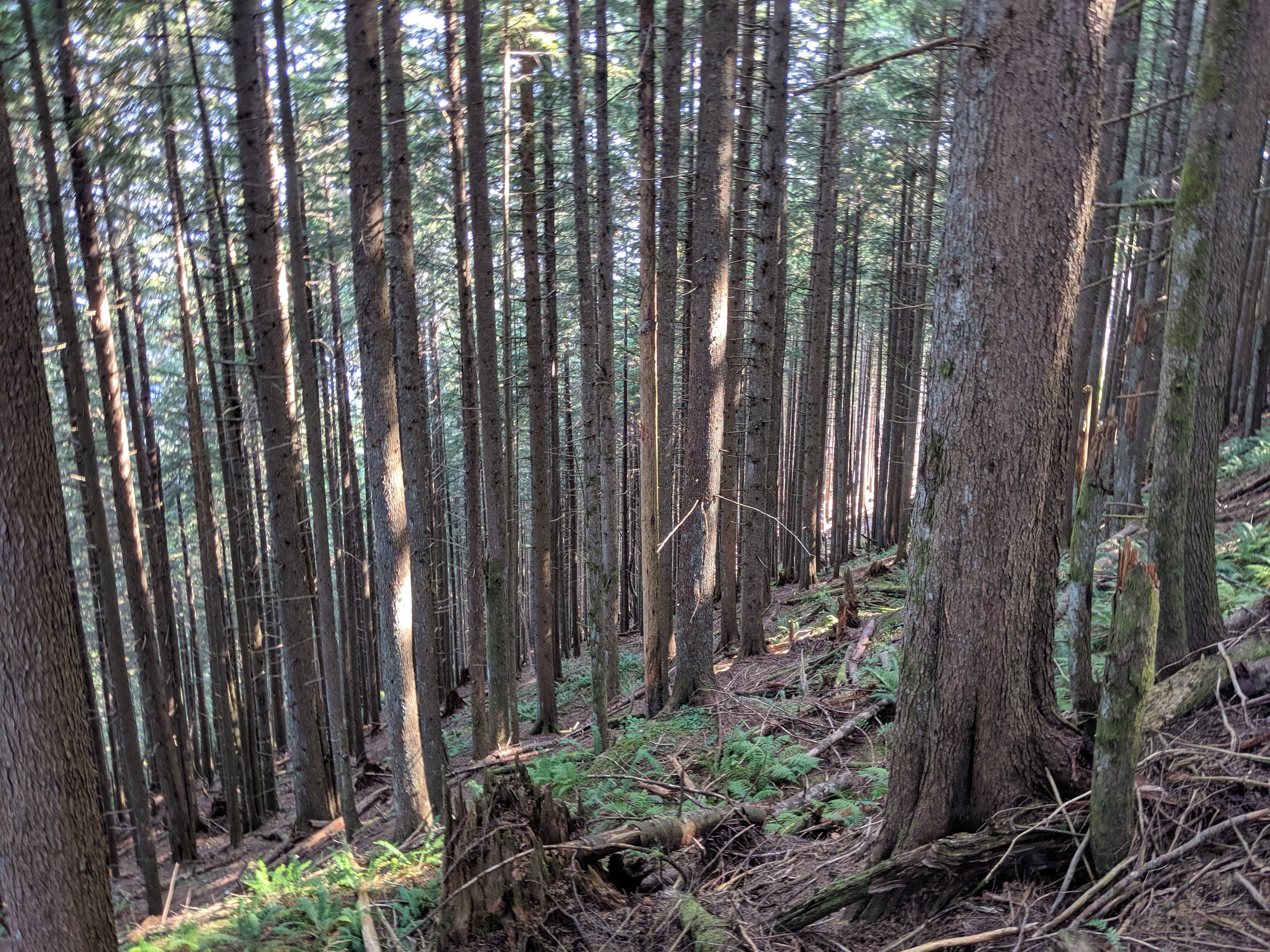 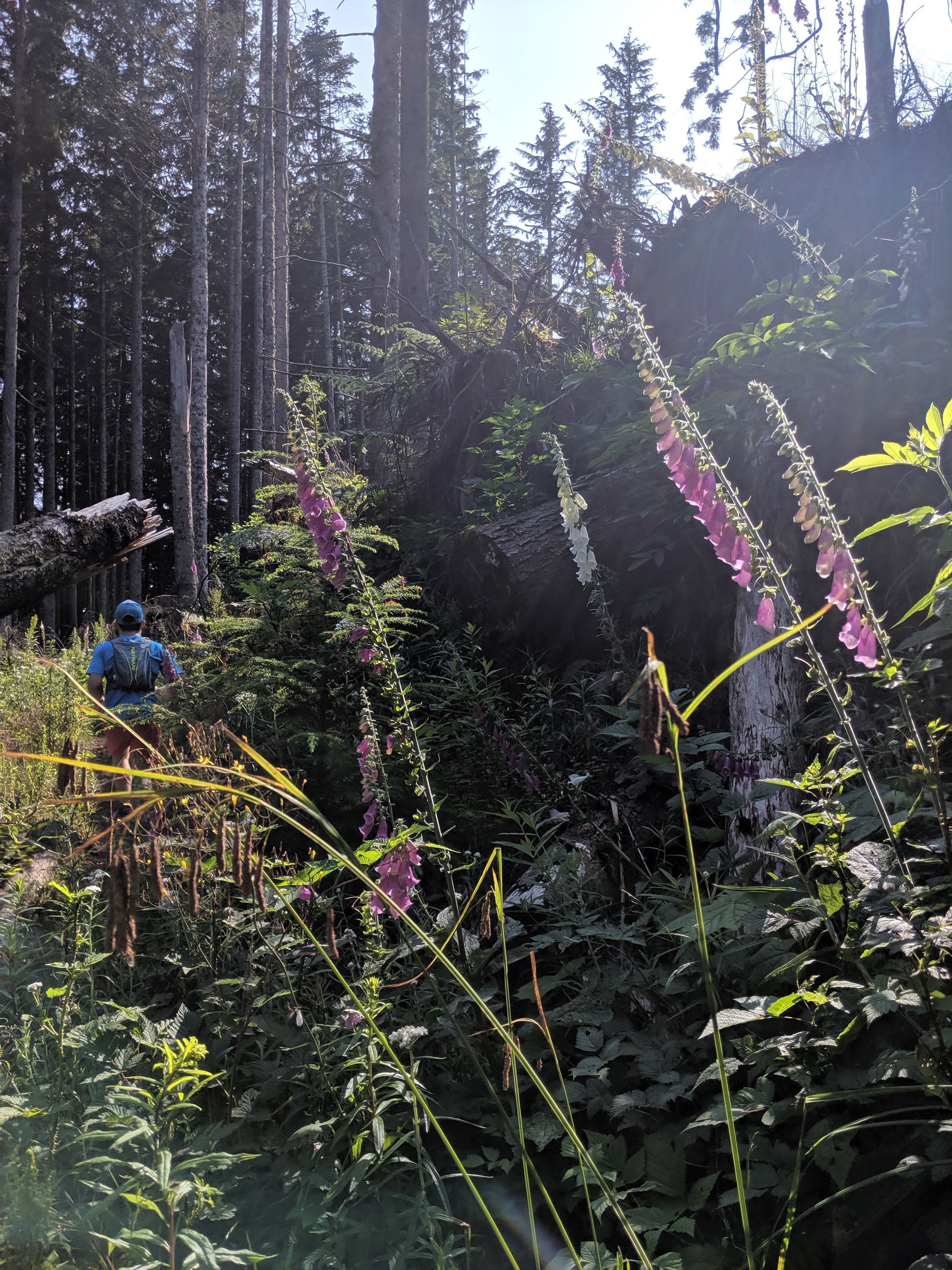 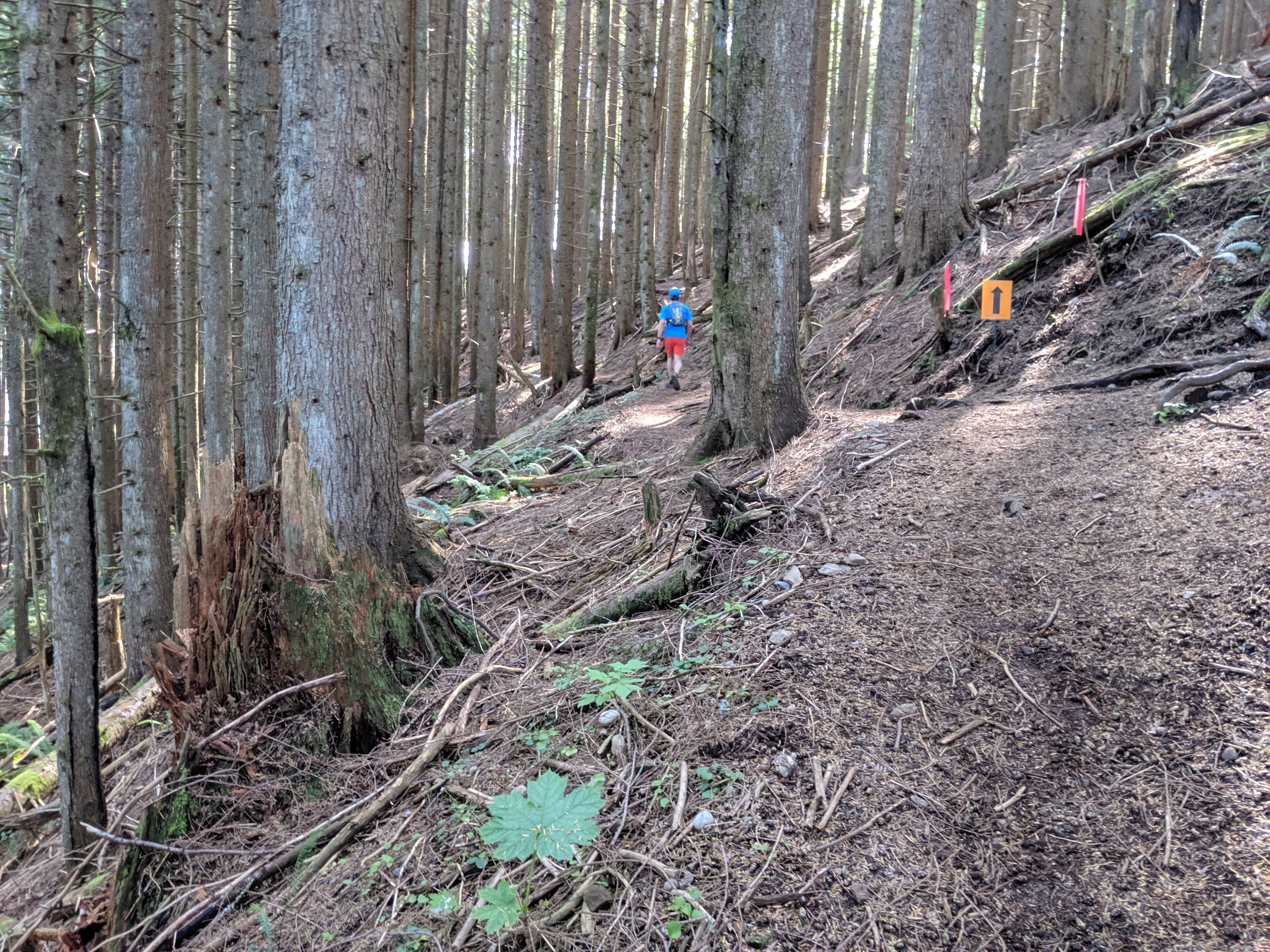 Throughout my descent I ran what I could and walked the rest. I took in some calories, but I knew I likely wouldn’t make the cutoff so didn’t have much motivation to push through the nausea. The rest of the descent was pretty uneventful. 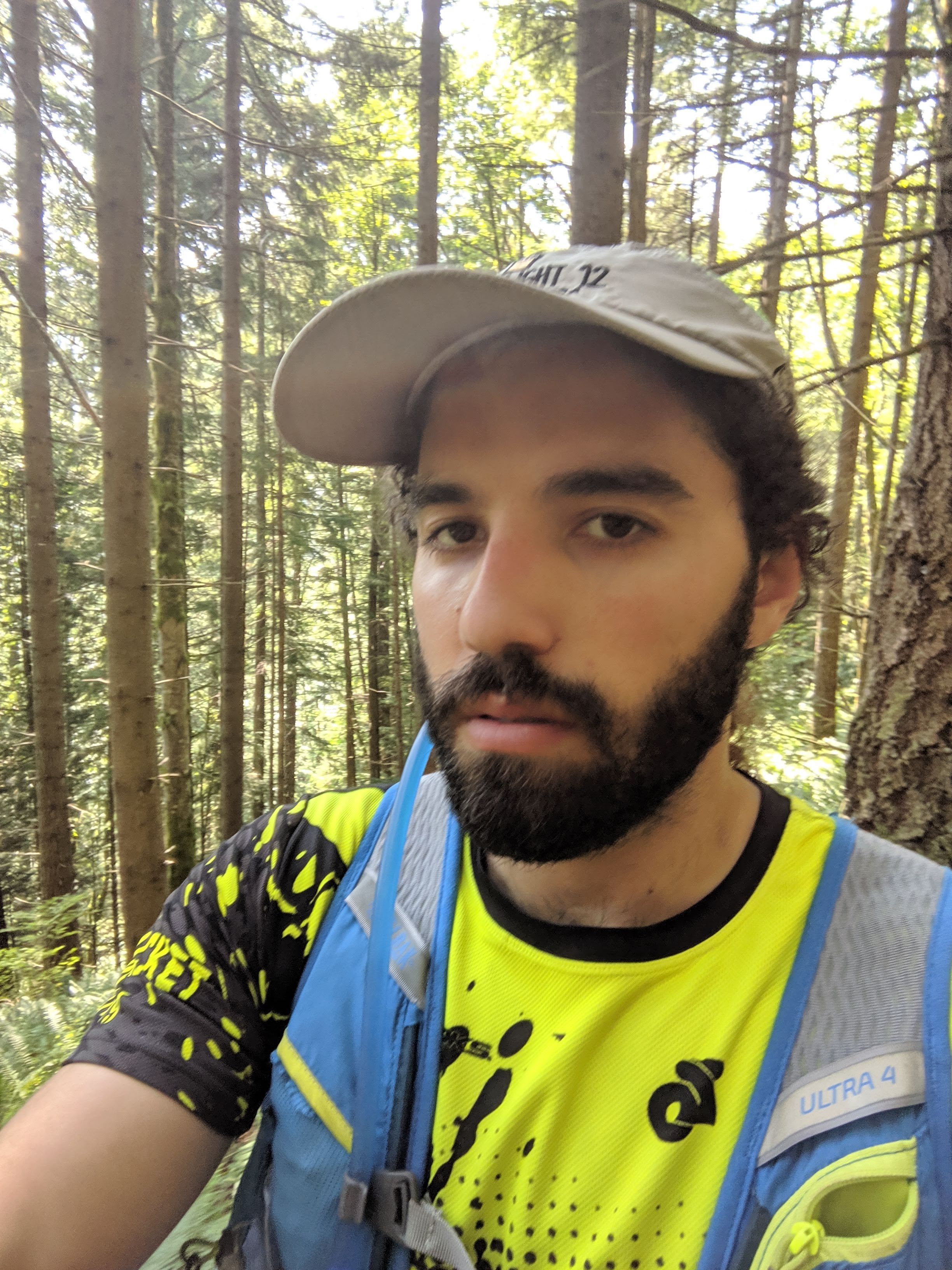 At 11:36am, 6 minutes after the cutoff, I texted Bobby to see if he made the cutoff. He responded 10 minutes later to let me know they bumped the cutoff up 30 minutes to noon, and he would keep going if I would. By that point I had a bad headache, was walking at a 20 minute pace, and wasn’t planning on continuing. We both were looking for permission to not keep going, so it wasn’t hard to convince each other that we shouldn’t keep going. 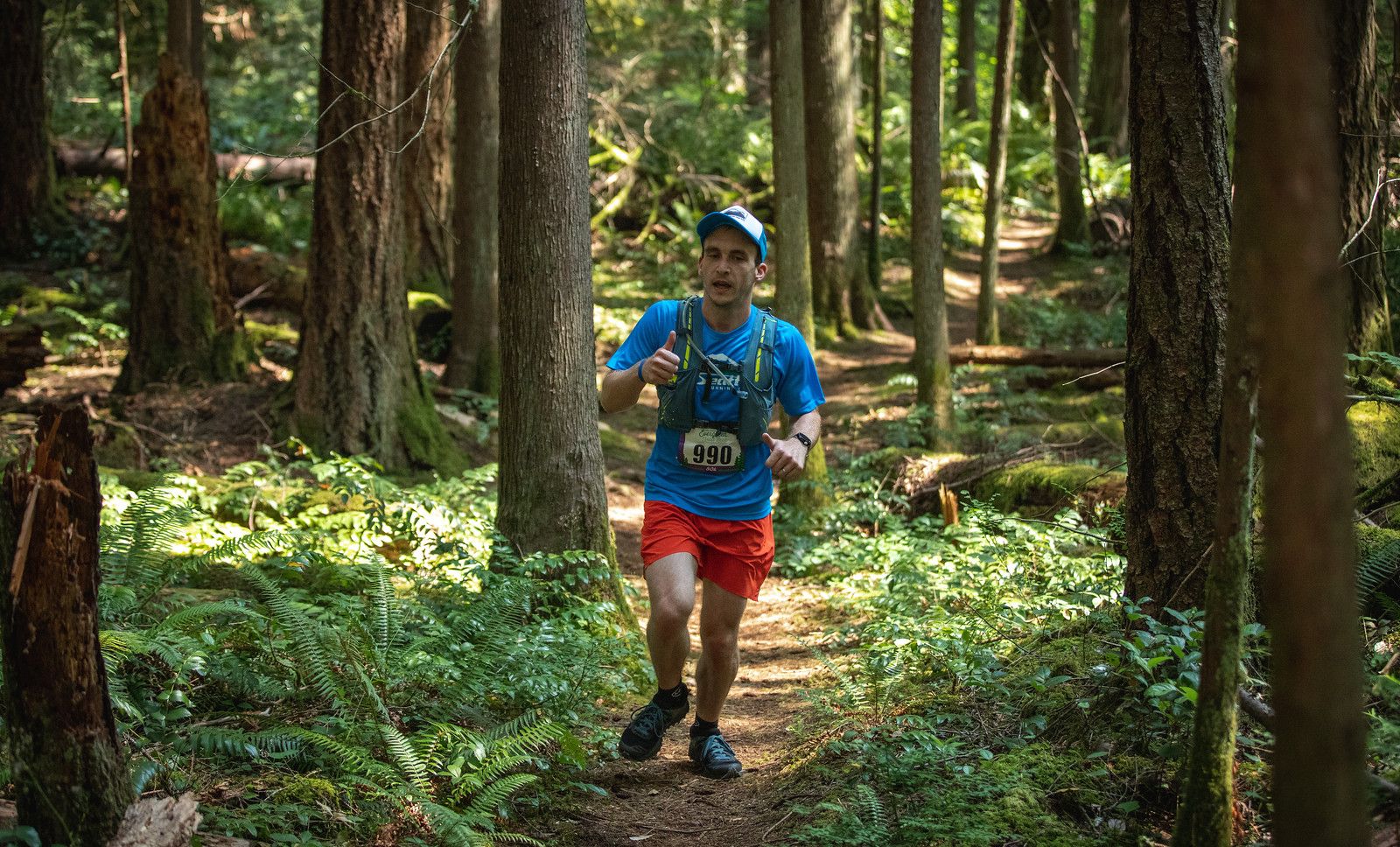 About half a mile before the finish I found Bobby running backwards to meet me. We finished my loop at 12:03pm and officially told the race director that we were dropping out. They still gave us a “finisher’s” pin and beer mug, and we had a couple pieces of pizza and hung out to watch a couple 50k finishers come in (the winner coming in 2 minutes after I crossed the finish line). 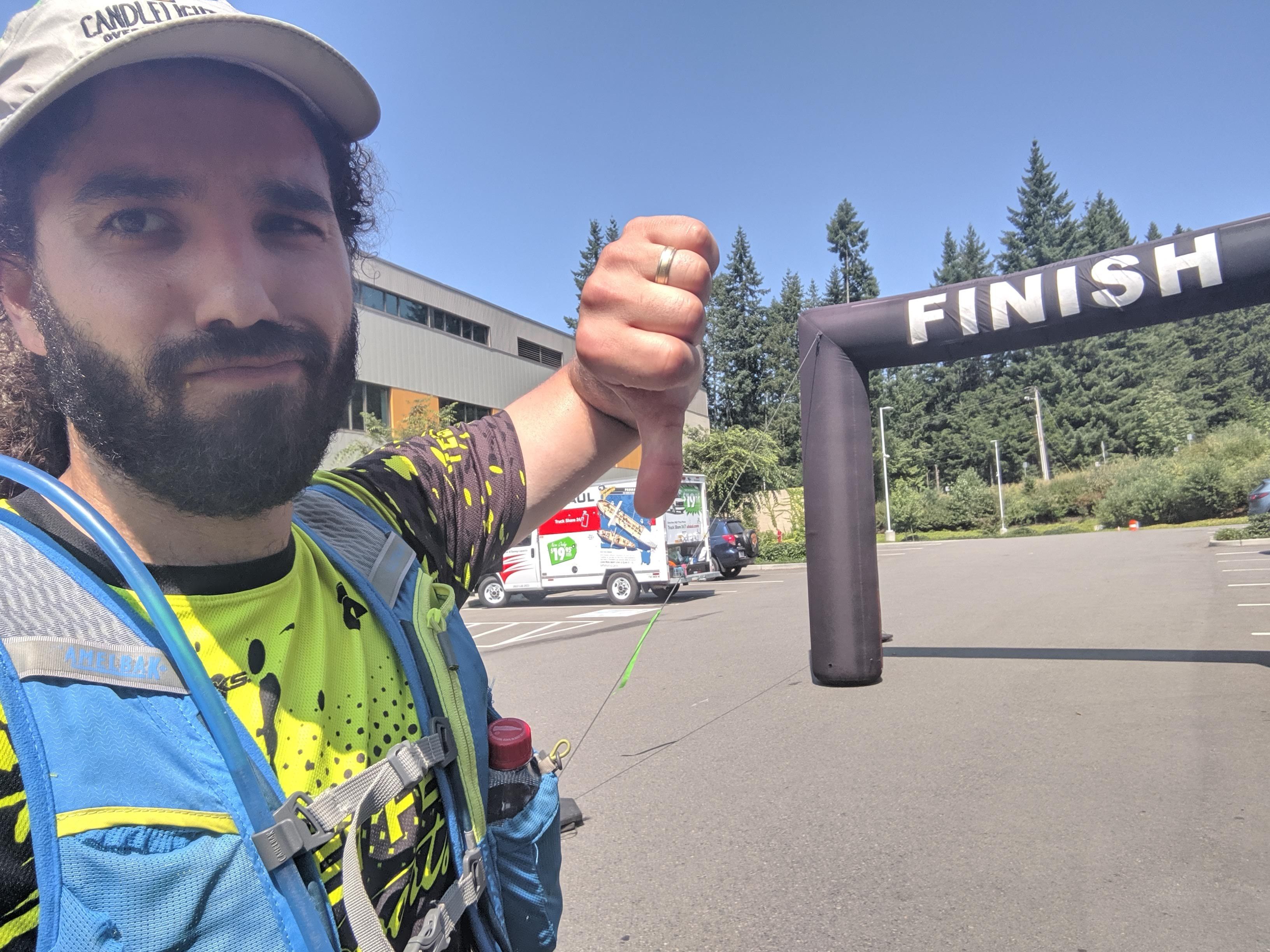 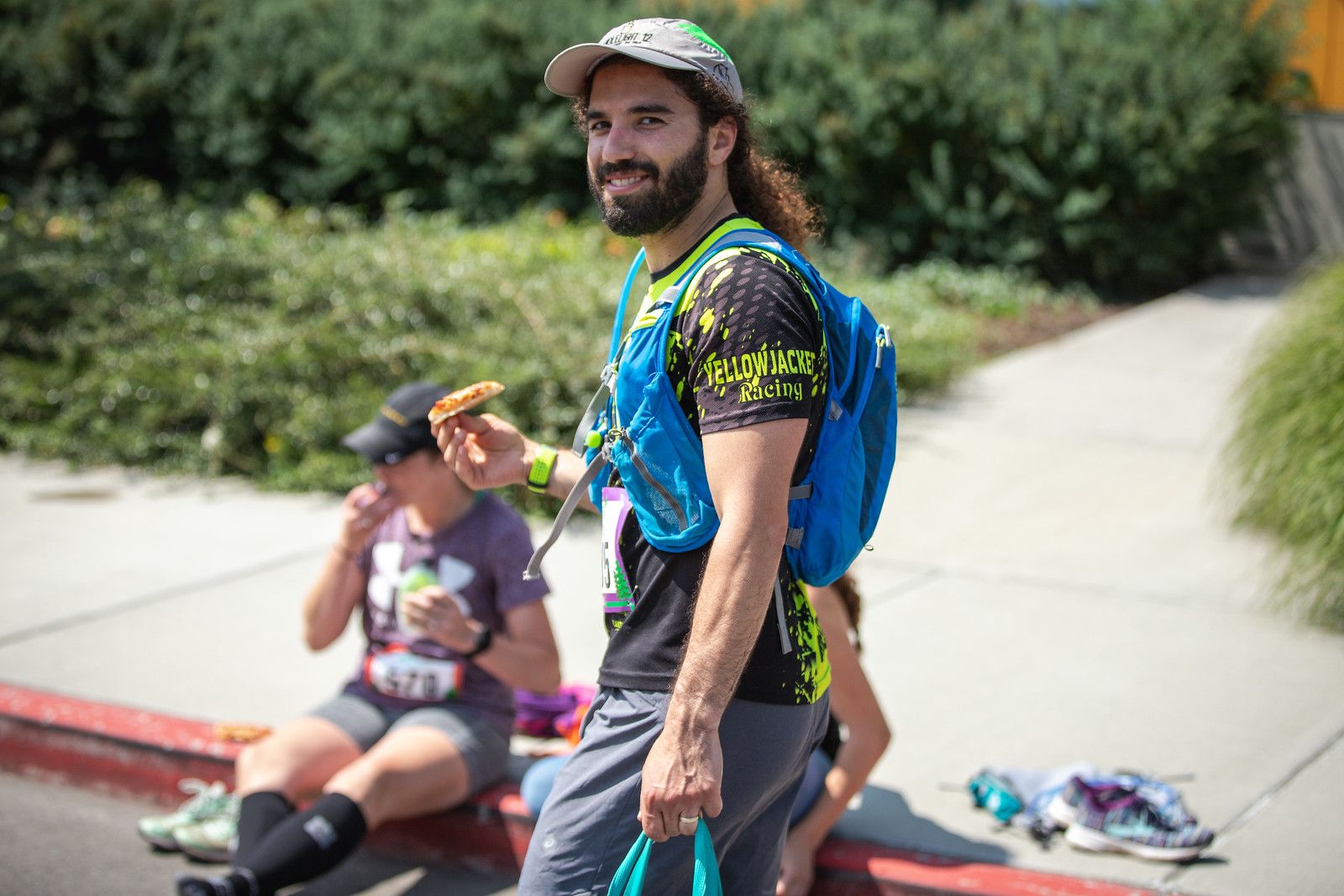 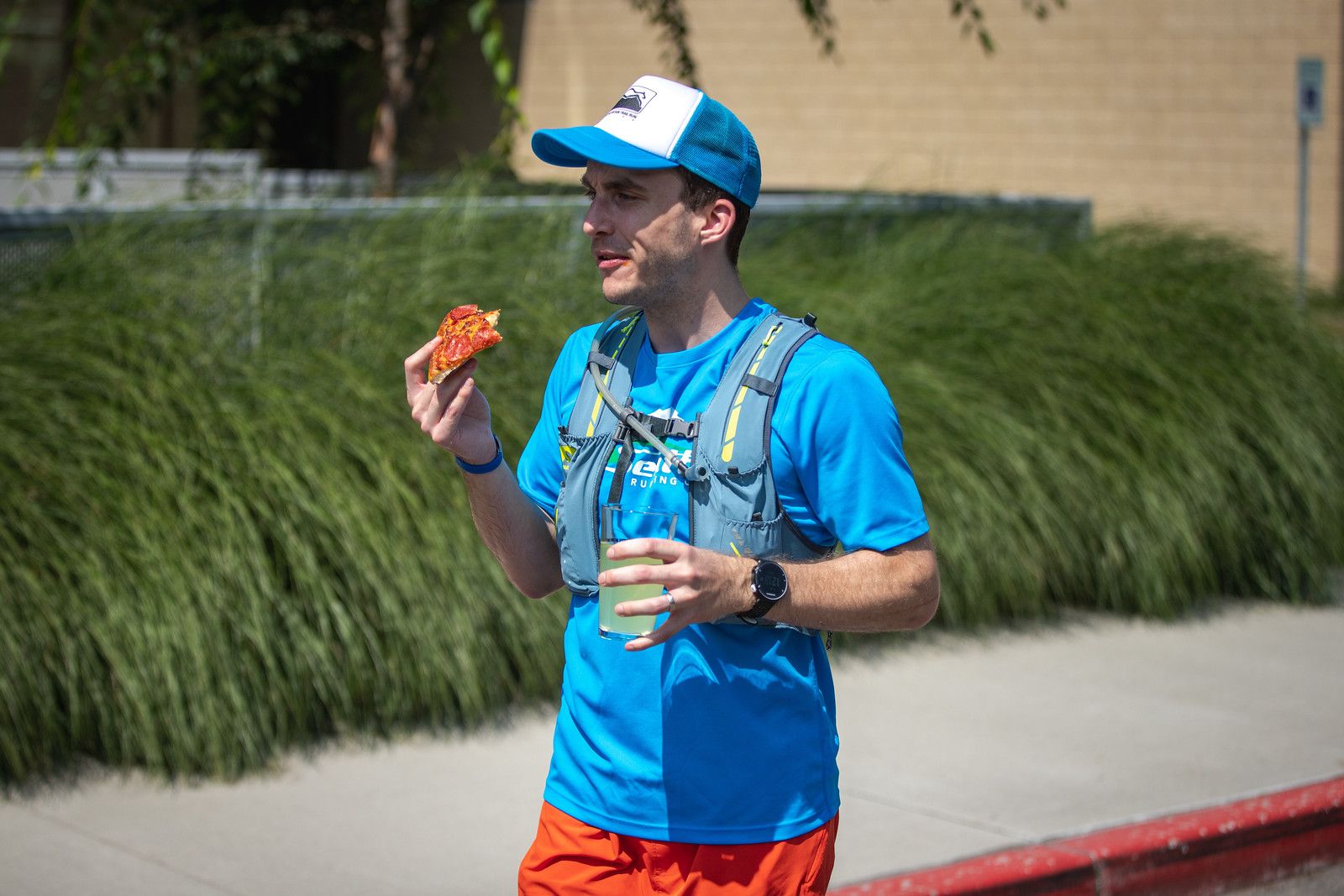 So, I learned that 4 ultramarathons in 6 weeks is my limit. I learned that I should probably start giving myself more than 2 weeks of rest between races. Tiger Mountain (and all we saw of the Pacific Northwest) was very beautiful, and I’m glad I got a good 17 mile run in while I was out there. I still need to run another marathon or ultramarathon in Washington state. Maybe I’ll attempt the Tiger Peak Challenge again in a couple years, or maybe I’ll stick to a more flat marathon. Hopefully Bobby and I can run whatever it is together and actually finish!